Kari Motor Speedway is a purpose built auto racing circuit or race track, located in Orratukuppai, Chettipalayam, Coimbatore, India. The track’s length is currently 2.2 km. It was inaugurated in 2003, in memory of Late Shri. S. Karivardhan or “KARI” as he was affectionately known.

The long stretch of the present track was originally a runway for Power Gliders, as it was part of an ultralight aviation manufacturing company owned by S. Karivardhan. The long stretch was also a popular venue in the late 1990s for drag racing conducted by Spitfire Motorsports. In 2002, the land was purchased by former racer B. Vijay Kumar to build a track to conduct National Motorsport events. The track was inaugurated by G. K. Sundaran, the father of the motor racing driver S. Karivardhan. 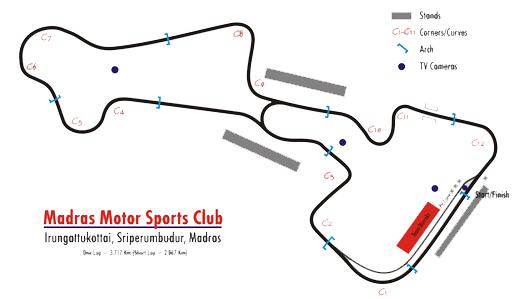 The Birth of an Idea

In the year 1952, while a 1948 MGTF was being cleared from the madras harbour, discussions between the owner and R. De souza on motor racing, rallying, etc. Gave birth to the gem of an idea of a motor sports club.

This idea took a hazy shape in the summer of 1953 when two M G’s chased each other from Chesney Hall to the parking lot of the Catholic Center. An unusually tall Englishman (Rex strong) and a comparatively short Indian (k Varugis) got out from their respective cars, stared and then probably grinned at each other and decided that racing would be more fun if organized off the roads. Thus, figuratively, one could read the words MMSC in the spiraling fumes of the twin exhausts.